This comes from a CSA member, and while it calls for butternut squash, any sweet, flavorful squash will do.

Preheat oven to 425 degrees F. Place garlic bulbs on a piece of foil and pour half of the olive oil over them. Add thyme sprigs then fold foil around bulbs to enclose them completely. Place the foil parcel on a baking sheet with the squash halves. Brush squash halves with 1 Tbs of the remaining oil. Add tomatoes, pepper and chile to the baking sheet. Roast the vegetables for 25 minutes; remove tomatoes, pepper and chile and reduce temperature to 375 degrees F. Cook squash and garlic 20-25 minutes more until squash is tender.

Heat remaining oil in large heavy pot over medium-low heat and cook onions and ground coriander until soft, about 10 minutes. Remove the skin from the pepper and chile. Blend in blender with tomatoes and 2 Tbs of the olive oil. Stir in vinegar and seasoning to taste. Add remaining oil if desired.

Squeeze the roasted garlic paste out of its papery skins into the onions. Scoop the squash out of its skin and add it to the pan. Add stock and salt and pepper to taste. Bring to a boil and simmer for 10 minutes. Stir in hlaf of the chopped fresh herbs and allow the soup to cool slightly, then blend until smooth, working in batches if necesssary. Alternatively, press the soup through a fine-meshed sieve. Reheat the soup gently and adjust seasoning if needed. Serve topped with remaining fresh herbs and tomato salsa.
Posted by Lydia at 5:21 AM No comments:

Broccoli Rabe with Carrots and Ginger

This is a nice side dish. I served it with Creamy Winter Squash & Carrot soup and home-raised turkey. The ginger gives a fresh, aromatic taste, and the carrots sweeten up the slightly bitter greens.

A large, heavy-bottomed skillet with lid

Heat a couple tablespoons of olive oil over medium heat. Add the carrots, ginger and garlic. Saute, stirring constantly, until the aromatics are released and the carrots start to get tender (your kitchen will fill with the wonderful smells of ginger and garlic). Add the greens and cover. After a minute, lift the lid and stir the wilted greens and other ingredients until mixed. Sprinkle with a bit of salt and pepper. Add 3-4 tablespoons of water (or stock if available). Turn heat down to medium-low and cover. Continue cooking, stirring frequently, for about 20 minutes. Add liquid if the greens start to sizzle.

Optional: Drizzle with a little bit of olive oil before serving, or stir in a pat of butter. This mellows the flavor of the ginger.
Posted by Dina Barnese at 7:17 PM No comments:

I used one of the large green squash from last week's CSA. Was it a Kombucha?

First, I cooked the squash. I scrubbed the outside of it, then cut it in half and scraped the seeds out. I cut each half into four sections and laid them out onto two cookie sheets, skin side up. They overlapped a little bit. I covered the squash with foil and baked at 300 degrees for about an hour and a half. Halfway through, I moved the bottom cookie sheet to the top rack and the top one to the bottom rack. I baked the squash until it was tender when pressed (I used a potholder to press through the foil). I let the squash cool on the baking sheets, then scraped the squash out of the skin. I ended up with four 1-quart containers of cooked squash, which smelled and tasted like pumpkin. Two quarts went into the freezer for later use; two went into the fridge.

Here's the recipe for the soup:

Heat 2-3 TBSP olive oil over medium heat in a heavy-bottomed medium sauce pan. Add the carrots, onion, garlic and thyme and saute until the carrots start to get tender. Don't let the garlic brown.

Stir in he squash and cook another couple minutes. It's OK if the squash is chunky at this point. Add the chicken stock and turn the heat up until the mixture comes to a boil. Turn back down to medium and add cinnamon, salt, pepper and brown sugar. Simmer, covered, for 30 minutes or until the carrots are tender, stirring every 5 minutes or so.

Puree using a hand blender, or you can put it into a stand blender to smooth it out. Return to the pan and keep hot over low heat. Just before serving, stir in the half and half. Serve immediately and garnish with a sprinkling of fresh ground nutmeg.

Remove the pan from the heat after adding the half and half. This soup can be reheated on the stove over medium-low heat. Stir often while reheating and bring to steaming but not to a boil.
Posted by Dina Barnese at 6:53 PM No comments:

Beets with Mint and Yogurt

I'm cleaning out the last of the veggies, looking forward to this week's CSA share after the holiday break. The turnips were used in a soup last week; all that was left today were a few beets. Hmm... what to do with the beets? I'm perfectly happy boiling them up and eating them with a dab of butter and salt and pepper, but today I went in search of something more creative.

I found this recipe in Madhur Jaffrey's World Vegetarian, just right to use up the beets and the last of the fresh mint in the crisper drawer. Don't let the color of this refreshing side dish put you off - it's delicious!

Peel the cooked beet and grate it coarsely.

Put the yogurt in a bowl and beat it lightly with a fork or whisk until it is smooth and creamy. Add the salt, pepper to taste, and cayenne. Mix. Add the mint and beet. Mix gently.

Put the oil and garlic into a small frying pan and set over medium-high heat. The garlic will eventually begin to sizzle. Press down on the garlic with a spatula and let it sizzle some more, turning the pieces once or twice, until they turn a medium brown. Now pour the flavored oil and garlic into the bowl with the yogurt and mix (the recipe doesn't call for it but I chopped the garlic before putting it into the yogurt) 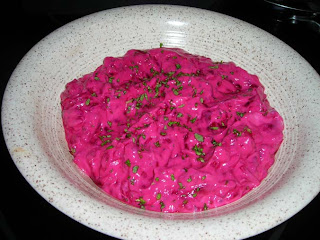